Bloodborne should have an "easy" setting. I know it would cause some sort of national crisis if they added it but it saddens me to think about how the deep Lovecraftian story, incredible atmosphere, compelling gameplay, and interesting character progression is locked behind bullshit bosses like Father Gascoigne and Gehrman the First Hunter. All of the bosses in Bloodborne are pains in the asses, but some of them, like those two, are just plain bullshit and they block off an otherwise amazing game.

Because the makers of Bloodborne decided to lock such a fantastic game behind such frustrating boss battles, I cannot recommend buying it or playing it. Once you get into it, you'll be hooked and next thing you know you'll lose an entire day trying to beat one boss because you need to see what happens next. That's no way to live. 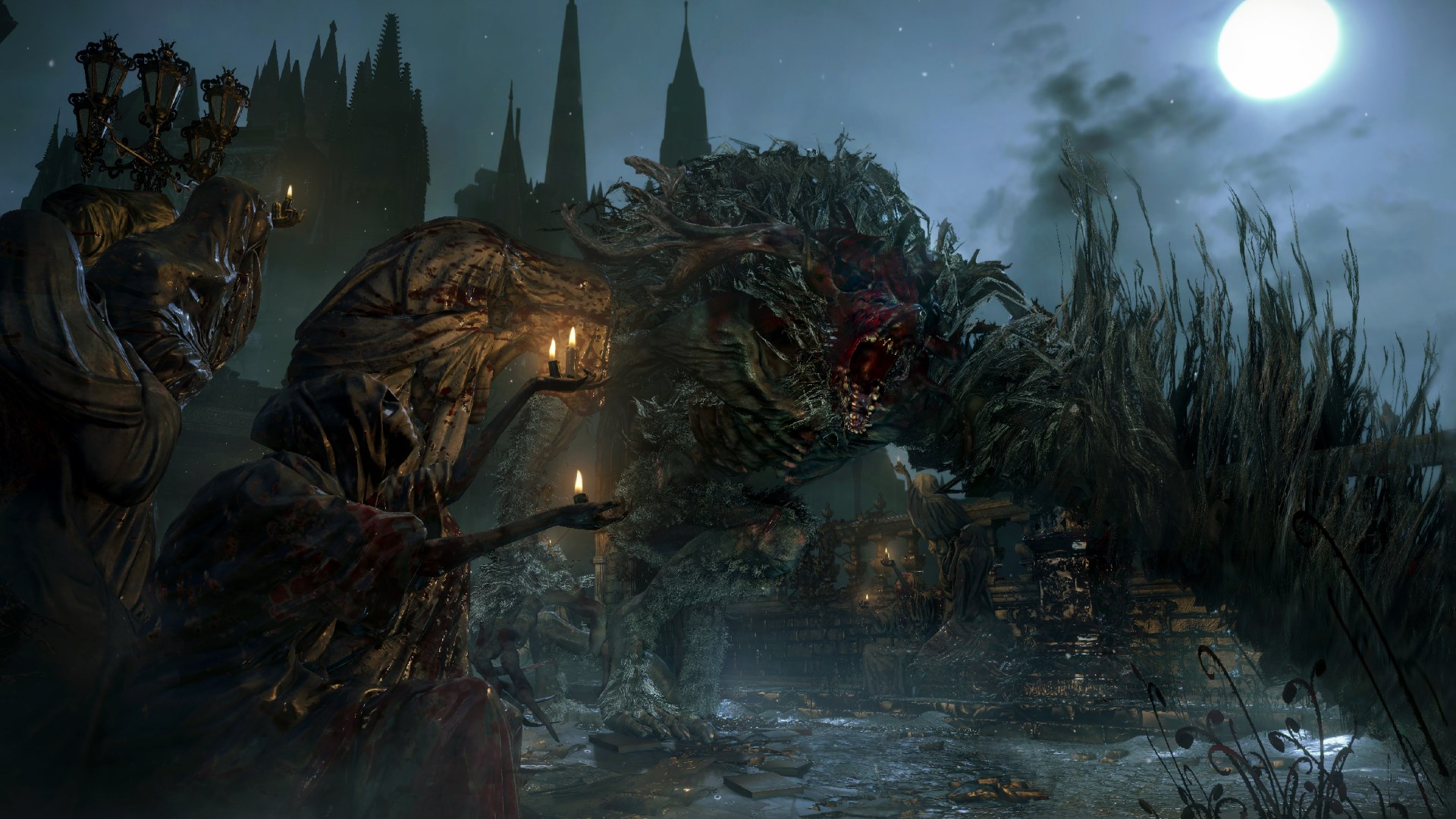 Night of the Hunt

The actual events in Bloodborne take place over a single evening but the story goes back hundreds, thousands, or even millions of years. This game has a ton of depth and you see it in every description of every mundane item you pick up. The folks over at Kotaku UK wrote up a wonderful writeup of what is really going on in Bloodborne that covers much of the hidden story. There is a ton of stuff I missed when I went through and this article helped me fill in a lot of blanks.

Every statue, every window, and every body you pass in this game has its own little story to tell and all of it is creepy and grim. When you enter the Grand Cathedral and see statues of strange alien beasts held as religious icons, you definitely begin to feel the scale of the game's story.

More than any game I can recall playing, Bloodborne takes the story it tells and spreads it over every surface of the environment and the enemies you face. Every facet of the game's artwork tells the horrifying tale of the Great Ones and the addiction to the blood that brought their power to our world.

When you first start out in Bloodborne you're killed by a man-wolf. It's the very first thing that happens and it's your first lesson in this game's unforgiving nature and steep learning curve.

A short time later you come to your first lantern, which seems like the game's version of a save point. You might run around dying for two hours after that before you realize there's no other lantern until you defeat one of the two bosses you can face initially. That seems horrible until you realize that the game has a second save point, opening gates.

Each of the game's levels are non-linear and have gates you can open up as you get further in. Once a gate is open it stays open even if you die. These gates act as short-cuts to different areas so you don't have to defeat the same 20 guys to get to the boss. There are a number of these gates in each area and often the gates let you zip past smaller guys to try to fight a boss.

Bosses are the hardest and most frustrating part of this game. Many of them have one-shot or two-shot kills. You might battle them for five minutes only to have them kill you when some new ability of them unlocks. There's another built-in difficulty manager for these bosses, though: summoning other players.

Unfortunately, as you get further in the game, it becomes harder to find people willing to help you with late-game bosses. On the final boss, Gehrman the First Hunter, I never did get anyone to help me and he took me about 20 tries over a long period of time to beat. Had I not gotten so far, I would have quit. Any joy I got from beating him did not make up for the frustration of fighting him so many times before.

Character progression in Bloodborne happens through using Blood Echoes, the game's version of experience points, to buy levels and increase stats. If you die, however, you drop whatever blood echoes you had and have to go get them again if you want to keep going. This seems more of a pain in the ass than it actually is. It's very easy to farm blood echoes to gain whatever levels you want or need and the levels offer you so little that they don't really matter against bosses anyway.

Unlike other RPGs, weapons and armor in Bloodborne do not increase in power as you find new ones. Instead, they each offer advantages and disadvantages when compared to others. Instead, you can spend a couple different types of currency, one of them very limited, to upgrade the items you like using the best. This means if you really like the threaded cane (and I do), you can just keep upgrading that and never pick up another weapon. Of course, once you upgrade an item, you're not very likely to switch to a new one. The upgrades don't make one weapon clearly superior to another but a weapon with an extra +20% damage is not something you want to stash in your inventory.

Armor has no upgrade option so you might carry around a bunch of different suits and use the ones that help the best when facing particular types of foes.

Too Old For This Shit

I've been playing video games for thirty years. I don't define myself by what bosses I beat. I don't need to build up my cred or update my status. I don't give fuck-all about trophies. I want to experience things. I want to experience what games like Bloodborne have to offer. Most games give people like me an "easy" setting that lets me have fun experiencing a game without banging my head on a wall for hours. I really wish Bloodborne had such a difficulty setting, and I know that my opinion is in the minority. The difficulty of the Dark Souls games (the same folks who made Bloodborne) define those games to many people. Still, there is a lot to love in these games besides their difficulty but it's the difficulty that will stand in the way.