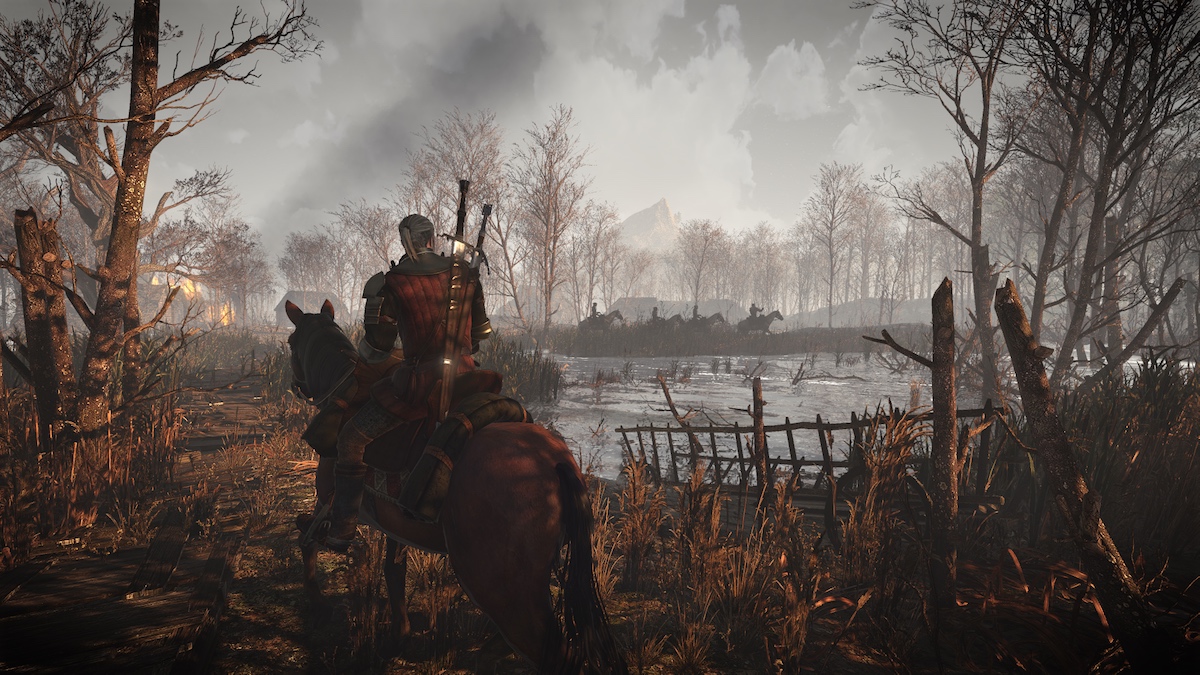 The Characters of Mass Effect and the World of Skyrim

Before Witcher 3 I might have said that Skyrim was my favorite single-player RPG. Skyrim was so vast that you could get comfortably lost in it for hundreds of hours. The world was huge and the dungeons deep. Witcher 3's world is just as vast and quite a bit deeper. It also packs on hundreds of quests, each with their own interesting twists and turns. You won't find typical collection or kill quests here. Most of the quests have quite a bit of investigation and get you quite hooked into the story behind the quest itself.

The character development in Witcher 3 is what sets it up above all the rest. For the first time in a long time, maybe since Mass Effect, I really care about these characters. The story to Witcher 3 is really simple. Geralt is trying to find his young student, Ciri, who is being chased by the Wild Hunt. This story never deviates but it gets quite a bit richer as you follow not only Geralt's path to find Ciri but also learn more about Ciri's path to escape the Hunt. These flash backs put you in Ciri's shoes and are a lot of fun to play. Ciri is an extremely capable heroine, not just a damsel in distress, and has a lot of power that even Geralt can never manage.

I read a ton of fiction so it's hard for video game stories to hook me these days. Witcher 3 hooked me good. I never wanted to skip a cut scene. Some of the scenes, particularly later in the game had me both laughing and crying.

The gameplay of Witcher 3 is similar to but not as polished as the gameplay in Shadows of Mordor. Shadows was my favorite game last year but the story and world are not nearly as rich as Witcher 3.

I found Witcher 2's gameplay to be paralyzingly complex and now it is a lot more streamlined. The hack, slash, dodge, parry, and blast mechanics of Witcher 3 are compelling all the way through. I enjoyed getting better at the gameplay while Geralt's power increased through leveling and equipment.

Witcher 3 definitely falls into the action RPG camp and holds its own within this group. It's a tad glitchier than I like with Geralt sometimes rolling in odd ways or getting stuck in fences (goddamn fences). These were minor annoyances.

I can tell a game has compelling mechanics when I want to do a fight scene again even after I've succeeded in it. There's a scene in Witcher 3 where I had to fight an entire club-house full of assholes and the end result looked like the House of Blue Leaves from Kill Bill. Eviscerated and dismembered bodies lay on the floor, stacked up in corners, and hanging from the rafters. If the game had planned it to look like that they couldn't have done a better job and they hadn't planned it. Every one of those bodies lay there because I put it there.

There's quite a bit of crafting in Witcher 3 but they've done something very smart. Once you build a potion, elixir, or oil you can easily replenish it without having to craft it again. On the surface crafting looks like a real bitch and if you hate crafting, as I do, this might push you away. Luckily, once you meet your first real herbalist, crafting becomes pretty easy to do. While you can pick up every flower from every bush, you never really need to. In fact, save yourself some time and skip all that picking-shit-off-the-ground stuff and stick to the fun parts of the game.

You can also craft weapons and armor but you don't need to do that either. There's a ton of loot in the game and the statistics of the loot matters very little within a level range when you think about the action RPG nature of the game. +2% damage doesn't matter when you're killing guys in two strokes anyway. Still, I found hunting down the plans for Griffin and Feline armor to be a fun way to see the sites in the world and still wear some pretty boss-looking armor.

A Bigger Game than my 50 Hour Uncovered

This game is huge. I played it for about 50 hours and still didn't touch everything Witcher 3 has to offer. For example, I never did play the built-in card game called Gwent. Gwent got the attention of the folks at Penny Arcade but I'm such a Hearthstone player that I couldn't see myself getting into that as well.

There are also tons of Witcher contracts and other random quests to explore. Again, each of these has a lot to offer and show you just how big and deep this game can get.

I never played Witcher 1 and barely played Witcher 2 and I loved Witcher 3. There are a lot of characters that Geralt clearly knows but I do not and that's fine. I was still able to easily follow the story. Someday I might go back and play the previous two games but I didn't feel cheated by not playing them first. I found the gameplay in Witcher 2 paralyzingly difficult. Picking up herbs and laying traps isn't what I enjoy in my RPGs and, luckily, Witcher 3 streamlined all of that.

If I had only one game to play in a year, Witcher 3 would be that game and it would likely keep that year busy. I love this game. I love the characters. I love the world. I love the action. I love the story. At this point in time, looking across all of the games we have available to us, I can see none better than Witcher 3.